The beautiful Black Swan golf course will be featuring a new technological marvel this summer: The "Aerial Golf Ranger" from New Paradigm Corporation, a Massachusetts company.  The Aerial Golf Ranger is a drone, and will be manning the skies controlled and directed by the starter.

Why a drone?  The key task this season will be to keep play moving so as to squeeze in as many golfers as possible and enhance course revenue.  That's what the drone is designed to do.

Starter Mat Rix told the MassWholeNews he is enthused about the possibilities.  "Fifteen minutes is plenty, more than enough to play a hole of golf."

"We got yahoo's here looking for their balls so long... I don't know what these people are doing... self absorbed, narcissistic golfers who think the world revolves around them.  We need a way to let them know, no, you're just another golfer so GET YOUR ASS MOVING!  We need a ranger out there busting their balls.  But the course can't afford to hire a ranger."

"That's what we're hoping the Aerial Golf Ranger can help us with.  When a group is playing slow, suddenly I'll be right over them letting them know I know they're the problem group.  The drone has a loud speaker system so I can issue warnings."

"Just the sight of the drone should be enough to light a fire under them.  That's the hope anyway."

Courses around the area are expected to follow along.

Rowley Pro Mary Wang agrees.  "We need this to meet our goals of no more slow golfers.  No more. Ha ha."

Should be interesting to see how the latest technology can enhance enjoyment on the course.    We'll be eager to revisit this topic.

"Changes are coming to the swan, the swan will never be the same.  That's my vision."

"Going to change the culture around here.  The guys here are, repressed.  As a result, they kinda drag their asses around and slow down play."

Asked what she proposes for a remedy she said, "glad you asked."

"I'm all about promoting, encouraging, and instilling, the emotions that golf inspires.  Rage for example, is a common problem that plagues the weekend golfer.  We're going to fuel that rage."    Reaching into a barrel in her office, she displayed a variety of broken clubs.  Grinning, "many a club has been broken.  We're going to provide a way for a swan golfer to express they're frustration when the greens are poorly maintained, or fairways thick with growth, and just let it go."

"We're going to implement club throw zones at each hole.

So much to come at the New Black Swan. 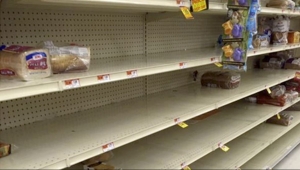 Georgetown residents empty local grocery shelves of bread and milk in what one employee called a "total panic".

And they have good reason to be terrified.

This storm will have teeth.  This storm could tear the bones off your back, it's a suicide trap, we better get out... ah... oh, could make you plagiarize Springsteen.

Local access weatherman Richard Tracy says this Nor'easter which is scheduled to make landfall at 6 am, is going to be a humdinger.

A little known fact: more babies are conceived during a Nor'easter than people perish from starvation.

Tracy pointed out this storm should silence the deniers and scientifically illiterate who say human flatulence isn't the cause of global climate change.  Clearly, it IS gastronomical emissions from the human digestive system causing dramatic shifts in weather patterns.  Warm to fever then icy cold.  The world is in a "I can't make my mind moment".  I'm either going to burn up or freeze.  One or the other but one thing is clear, humans are the cause.

Who can say for sure?  Whether a weatherman can truly diagnose such complexities without a biologist is beyond doubt, according to Tracy.  "I can say for sure" Tracy says while displaying charts and graphs as proof.

Regardless of the storm, Tracy sees no hope.  The flatulence will continue.  The climate will continue changing.  I see a bad storm arising, I see trouble on the way, well don't go round tonight it's bound to... oh ah er I'm plagiarizing Creedence.